CTAG’s strong commitment to the development of automotive electronics and Advanced Driver Assistance Systems (ADAS), autonomous vehicle and connectivity has been publicly acknowledged during the XVII Spanish Congress on Intelligent Transport Systems (ITS).

This congress, organised by ITS España, was held in Madrid from April 25 to 27, 2017. Among the participants were many organisations, personalities and experts related to the transport sector, the new mobility concepts and new technologies applied to the vehicle.

A large number of papers were presented during the event by organisations such as the DGT, local governments, universities and large infrastructure companies. Galicia had a very significant participation led by CTAG, which presented a paper on the Autopilot project, in which PSA and Vigo City Council also participate. CTAG was awarded the “ITS en el Vehículo” prize, in recognition of its consolidation as a Reference Technology Centre in Europe for the application of ITS in the automobile.

In this way, CTAG has been recognised for the work undertaken since 2005 in research, development and innovation projects focussed on intelligent transport systems. 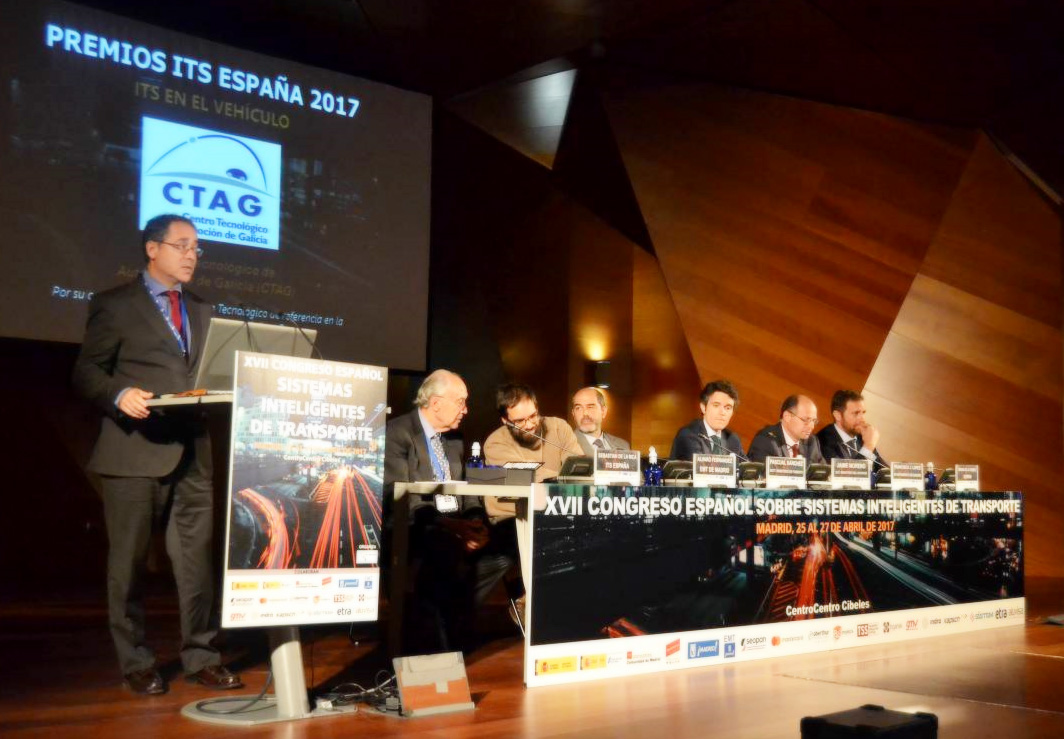 After more than four years of activity, the ecoDriver project has published its preliminary test results of 9 different assistance systems for eco-driving, in which 170 drivers participated in seven European countries, both in controlled and real driving conditions.

The objective of the ecoDriver project is to develop the most effective feedback system (HMI) to get the driver to adopt a green driving behaviour in vehicles equipped with the project developments. The ecoDriver systems take into account vehicle data and environment and, based on these data, they perform energy calculations to recommend to the driver the optimal point, in order to drive as efficiently as possible. These recommendations are based on the optimal speed profile in each situation, gear shift, and behaviour generally based on the anticipation of the road circumstances.

The targets of the project are to achieve a significant reduction of fuel consumption, increase driving safety and reduce emissions of polluting gases.

CTAG’s role in the project

CTAG played an important role in the ecoDriver project, participating in most activities. In the development phase CTAG contributed to the energy rating system, foundation of the Full ecoDriver System (FeDS) for the calculation of the recommendations to the driver, and developed fully the programmed HMI on an Android Samsung Galaxy Note 2 device. The following image shows an example of the interface designed and programmed in the final version of the FeDS, presented at the final event held at the Mercedes Benz Museum in Stuttgart last March 17, 2016: 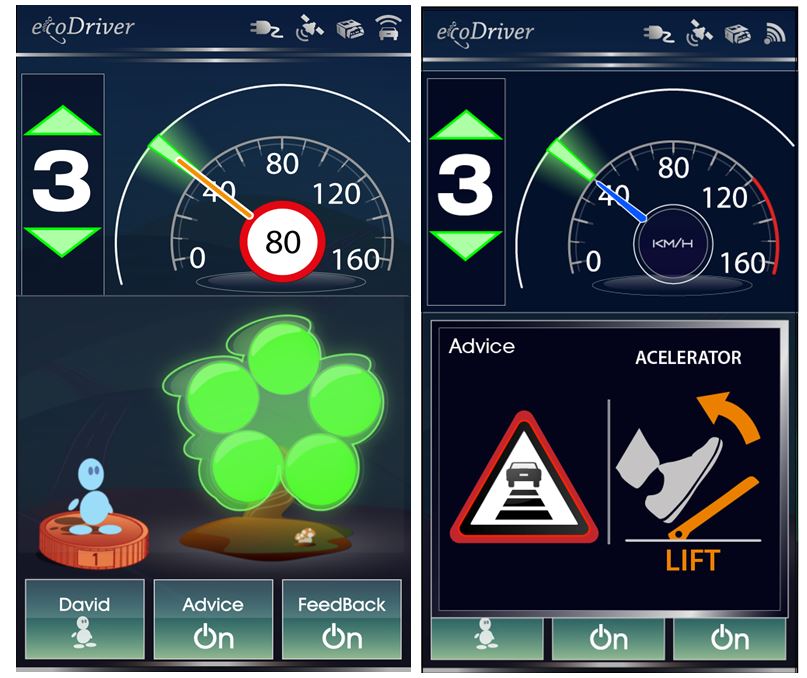 CTAG led the development of this HMI application defining its final design, behaviour and operation logic, both for the first version, used during the road tests, and for the final version presented at the final event. Besides, CTAG directed all the planning, design and development of the road tests conducted with the systems developed by Daimler, BMW, FIAT, TomTom, CTAG and Ifsttar in seven European countries.

CTAG performed tests, both during the design phase and the testing phase, in the driving simulator, in Vigo and its surroundings (urban and interurban areas and highways) and on the recently built private test track.

In order to obtain the final results CTAG made a central server available to the project, where all the data collected during the tests were stored and managed. In addition, CTAG developed the tools to manage these data, generating the necessary indicators to evaluate the results.

Average speeds in free driving are reduced around 3% when driving maintaining cruising speeds, and acceleration and deceleration intensity are reduced by 6%.

Regarding the main objective of the project, fuel reduction using the ecoDriver system was reached in figures between 13% and 20%, depending on how the driver followed the recommendations proposed by the system. As a result of this gas emissions were significantly reduced.

The last General Assembly of the European Project DESERVE (DEvelopment platform for Safe and Efficient dRIVE) was held at CTAG at the end of September with representatives from 14 of the 25 partners involved. Topics like the last work packages to fulfil, dissemination activities and the preparation, organization and agenda of the Final Event were discussed.

In addition, DESERVE partners are preparing the publication of a DESERVE book with the title “Towards a common software/hardware methodology for future advanced driver assistance systems- The DESERVE approach”, including lessons learned and results extracted from the project as a great dissemination action.
After almost four years’ work, the European Project DESERVE approaches its end with a delay of 6 months over the initial timeline. The project will end in February 2016.
CTAG is involved in this project since its beginning in 2012. The project aims at the design and implementation of an ARTEMIS Tool Platform based on the standardisation of the interfaces, software reuse, development of common non-competitive software modules, and easy and safety-compliant integration of standardised hardware or software from different suppliers.

DESERVE Platform should be capable of running different driving assistance system functions, flexible enough to run more than one function and scalable in order to reduce costs as much as possible and to tailor it depending on the final usage.

The project is divided in 8 subprojects. During this time, CTAG has collaborated in different work packages within 5 of these subprojects (in some of them the collaboration is still ongoing), and led the development in work package 4.3 in order to provide a vulnerable road user protection function vision based.
This project is being co-financed by the Junction Union through ARTEMIS and the Spanish Ministry of Industry, Energy and Tourism.

At the tenth edition of the Barcelona International Motor Show Awards, CTAG, Automotive Technology Centre of Galicia, is one of the winning companies of the awards given to the best Innovations in Car Connectivity.

O Porriño, 8th May 2015.- The first prize awarded to CTAG, today, Friday, 8th May, belongs to the Car to Car category, focusing on communications between vehicles to improve their safety. CTAG is rewarded for the work performed within the SISCOGA project (Galicia Cooperative Systems), a smart cooperative corridor that integrates more than 100km on interurban roads in collaboration with the DGT and urban sections in collaboration with the City of Vigo. The objective of this permanent corridor, opened in 2011 and pioneering in Europe, is to conduct operational tests on new car-to-car and car-to-infrastructure communication systems.

This corridor is used in research projects, Field Operational Tests, and cooperative systems development and set-up projects and has become one of the test sites for vehicle-infrastructure communication of reference in Europe.

This corridor is currently part of two European pilot projects supporting the market deployment strategy of this type of technologies:

The Barcelona International Motor Show Awards, with about thirty candidates, also rewarded Redbend and Grupo Volkswagen-Audi España for their innovations in vehicle connectivity. The aim of the awards is to promote innovation and excellence in the automotive industry by encouraging the automobile as an efficient, affordable, safe and sustainable means of transport. 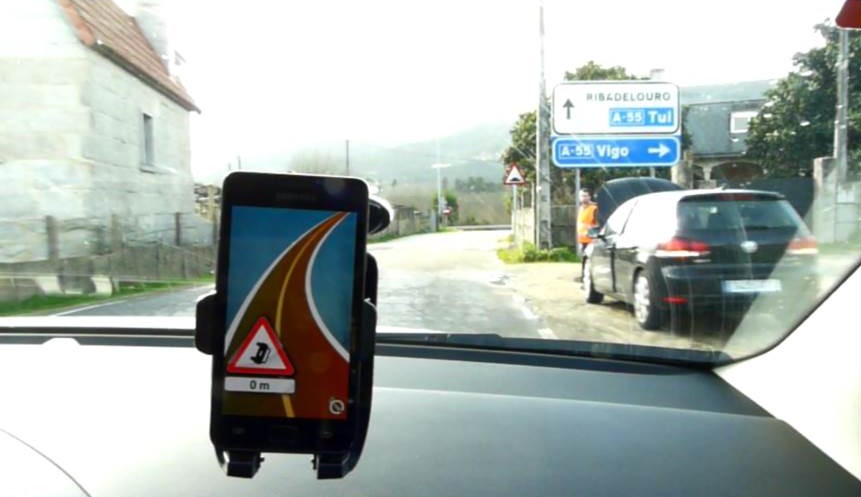 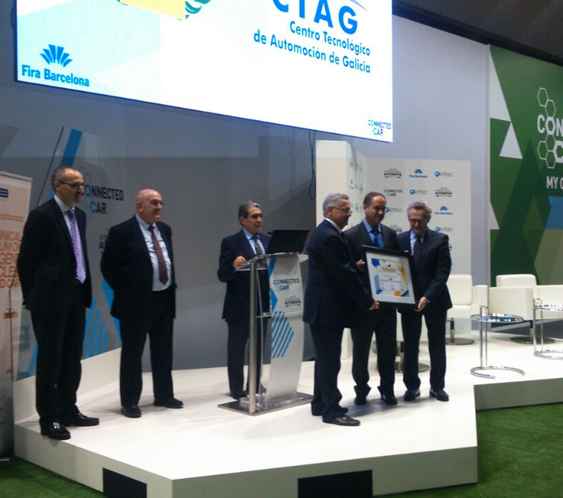 This corridor is currently part of two European pilot projects supporting the market deployment strategy of this type of technologies: 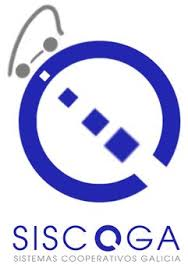 Based on the vision of the great potential of cooperative communication systems in the increasingly booming field of smart vehicles, connected not only to other vehicles but also to the road infrastructure, the DGT has included in the projects funded by its Área de Movilidad, with reference SPIP2014-01517, the new approach proposed by CTAG on the use of vehicles as traffic information mobile sensors, using the communication channel specified by ETSI for such purpose -G5-.

CTAG’s project uses such innovative technologies as C2X, cloud computing or FCD to achieve the “detection” of events that are potentially dangerous for driving where conventional sensors do not exist to that end.

The evaluation of the technical feasibility of the proposed idea with a view to leave an open door to a real use of this information by conventional systems and services has also been studied within this initiative.

130 technologists work in these new facilities, which cover an area of more than 7,000 m2 including workshops, laboratories and development studios, and more than 15,000 m2 of tracks that reproduce different environments to test the new intelligent driving systems. System validation and innovation activities which meet current and future needs of the automotive sector are carried out at these facilities.

Francisco Sánchez Pons, Director of Electronics and ITS at CTAG, participated in the 2014 edition of the ERTS2 congress that took place on February 5th to 7th at the Pierre Baudis Congress Centre in Toulouse, France.

Francisco Sánchez took part in the roundtable discussions on the topic “Highly Automated / Autonomous Vehicule”, presenting the latest projects developed at CTAG in this matter.

The ERTS2 Congress is a unique European cross sector event on Embedded Software and Systems, a top-level scientific platform with representatives from universities, research centers and industries.

For more information on the Congress, please visit the website: www.erts2014.org