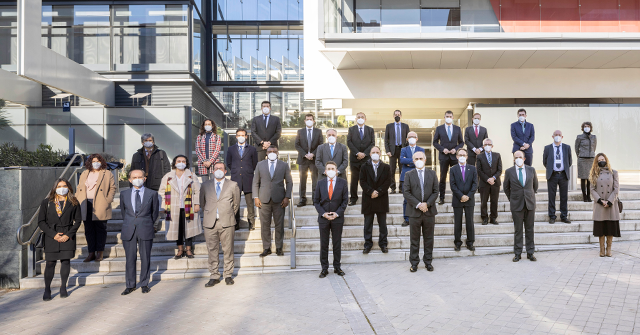 The SHYNE (Spanish Hydrogen Network) project is the largest multisectoral consortium in Spain, created to promote the decarbonization of the economy through renewable hydrogen. It will deploy projects in ten autonomous communities and it have a total investment of €3.23 billion euros that will serve to develop more competitive technologies and evolve both the Spanish industry and its infrastructure towards decarbonization, generating more than 13,000 jobs.

For CTAG, this initiative reaffirms its development, research and technological innovation strategy around new environmentally sustainable propulsion systems, while consolidating the  collaborative approach of the Centre with a new alliance with world renowned organisations.

Repsol leads the consortium, while six other companies, each a benchmark in its sector – Alsa, Bosch, Celsa, Enagás, Scania, and Talgo – act as promoters of the initiative. The remaining 26 partners, including CTAG, are associations, public and private companies, technology centres, and universities which will assume the role of project collaborators.

Among the objectives of the consortium, the ambition to reach an installed capacity of 500 MW in 2025 and 2 GW in 2030 stands out, which represents half of the target set in the Hydrogen Roadmap published by the Spanish Government. In addition, projects will be promoted throughout the value chain, including installing renewable generation and stimulating the different industrial uses of hydrogen through a strong sectoral integration. The use of hydrogen in all transportation segments will also be promoted through the production of synthetic fuels and the creation of an infrastructure with at least 12 hydrogen filling stations by 2025.

SHYNE aspires to be a benchmark project in Europe, structuring new opportunities throughout the value chain, through collaboration between companies that pursue a common goal,  decarbonizing their activity, and join efforts and investments to achieve it.